Exploring the Reflux data flow model, advocating why it is a good idea, and showing what it can look like in a React app

There is however a paradigm shift in how Reflux expects you to structure your data flow, which can be hard to grasp initially. This post will try to explain this approach.

For a look at what a pubsub API normally looks like let's take a look at Backbone, which has a very traditional implementation in its Events module. This module contains both publisher and subscriber functionality and is mixed in to all Views, Models and Controllers, as well as into the Backbone object itself.

The main subscriber method is listenTo:

The publishers then have a corresponding trigger method. So if the publisher above did this:

Then this call would be made in response:

You could say that each publisher is a radio transmitter with different frequency channels. A subscriber then chooses which channel (eventname) to listen to.

We have a very similar situation in the DOM, where each DOM node can transmit a range of different events.

The only thing Reflux does differently is that it does away with the different channels. Hence there is no eventname concept in Reflux. The above sequence in Reflux would be:

Each publisher will only ever transmit the same kind of event. Initially I thought this to be extremely limiting - and it is - but as it turns out, this makes the whole application data flow much easier to reason about.

The core of Reflux is the Publisher and Subscriber (here called Listener) modules, which can be mixed in to any object (here using underscore/lodash):

What then are the Action and Store concepts in Reflux? Well: a Reflux Action is merely an object consuming the PublisherMethods like mypublisher above, but with a few conveinence extras. Foremost is the fact that the action is a function wired to the trigger method:

A Reflux Store corresponds to mypubsuber, i.e. it is both a Publisher and a Subscriber:

What about an equivalent for mysubscriber? Well - as we will see, an object which does nothing but listen in your app will likely be a view. For React, Reflux therefore supplies a special mixin containing the ListenerMethods and which takes care of mopping up if the view goes out of existence:

Now that we know what tools Reflux supplies, we can start to discuss how to use them! First consider the problem; Something is happening in one object (a user event caught in a view), which we want to react to somewhere else (say a localStorage module storing the setting that the user just selected). How can we set this up?

For discussion's sake, let's explore a few different ways in which this could be set up in a Backbone app:

The view can have a reference to the settings module and call a method on it directly:

Simple but a bit clunky. The view needs a reference to the settings object, and it is dependant on the exact API of the settings.updateVolumeSetting method. The two objects are very tightly coupled, which is a good way to ensure future headache.

The settings module can listen to events from the view:

Now we must instead pass the view to the settings object, which isn't much better. At least we got rid of the API dependency, but the coupling is still tight.

Note that this approach also requires that the settingsview.js returns a view instance and not a constructor.

We can use a global event bus to transmit the events. In Backbone, the Backbone object itself is a convenient place for this at it is already a dependency of all objects, and it contains the Events API.

This looks a lot better - we no longer have to pass object references around at all! Instead of having one of the participating objects depend on the other, we make them both depend on a third party (the Backbone object) which takes care of the communication.

On the other hand, communicating lots of events over a central channel like this can easily get out of hand; let your guard down for an afternoon of coding, and you'll suddenly have a real hell trying to figure out who transmitted what to make the app blow up in your face like it just did.

Here's what a solution could look like using Reflux in our Backbone example (not an advocated match, but used here for the sake of discussion (and I'm not even sure importing Reflux in this way would overwrite Backbone's Events API (probably not))):

As you can see, Reflux is really similar to the global event bus solution from before. The only difference is that instead of one global channel in which we specify event type, there are lots of global channels, each dedicated to a specific event.

So, is having many global channels really any better than having just one? As it turns out, yes! There are several advantages:

A comparison with Flux

On a higher level, the structure employed by Flux and Reflux are very similar. Flux too employs a global event bus approach, with event-specific channels. However, instead of making all actions into event dispatchers like Reflux, Flux employs a single "app dispatcher" much like Backbone, although with mechanisms in play to enforce the event-specific channel approach.

The fact that Flux has a central Dispatcher makes for lots of cruft in the code, as our previous code comparison between the two clearly demonstrated.

If you need more convincing, compare the Reflux TodoMVC implementation with the Flux version.

Enough Backbone babbling, what about best practices for using Reflux in React? We touched on it in the previous post, but wanted to revisit that here in the context of event flow. Here therefore is a stone tablet of divine law:

It's been done to death, but here is the (relevant parts of a) Firebase chat setup from a recent site work of ours:

Here's what will happen when a user enters a new chat message:

If we anonymize the components to get back to the stone tablet laws, here's what's going on: 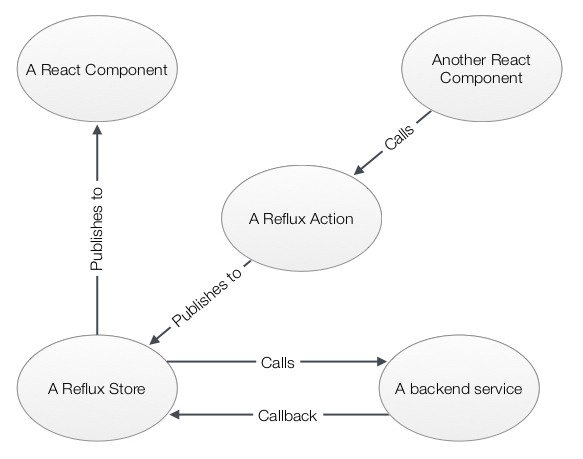 Each "published to"-arrow of course corresponds to a reversed "listens to"-arrow.

If any of these three points missed their mark, scroll back to the top and read again, or make an angry comment below!